Using the best model and creating a formula can keep the fundraiser on track. Little Black Dress Party (LBDP) is a not for profit located in Washington state. They focus on creating community awareness by bringing women together for unique and fun fundraising events. These events benefit local charities that focus on women, children, and families. Partnering with a new charity every year allows LBDP to help lots of different groups.

The signature Little Black Dress Party aspires to provide an opportunity for women to get out, get dressed up and have fun, while at the same time increasing their awareness of local charities, thus inspiring them to get involved.”

Little Black Dress Party has this down to a simple formula. 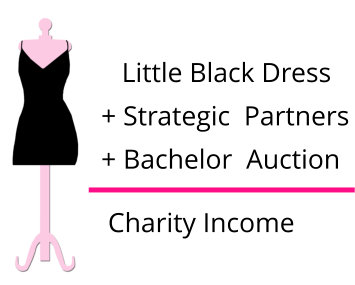 Name and Images are Consistent

Little Black Dress Party instantly conjures up images of party and fun. LBDP merges that with with their mission of giving back to the community. Branding the party as Little Black Dress Party really creates a mental image that is easy to remember and adored. Recently they did swap out black for blue to celebrate the bachelors in blue uniform, the imagery still remains the same.

Consistency is key. Doing the party as little black dress party past attendees as well as future potential attendees can understand in one illustration what to expect.

Event location does change annually to keep the interest level up and diversified. Changing locations means each venue is fresh. Fresh for new food and fresh for marketing and promotion. When LBDP chooses a location for their event location it’s a with the understanding that both will have a positive impact on each other. The locale is carefully chosen for the dining function but ALSO because of their willingness to really partner. When the restaurant helps market and celebrate the charity the message get spread a little wider each year.

Choosing a new charity each year is actually part of the consistency. LBDP chooses a charity that gives back to a local group that helps women and children. This to chosen wisely for both their mission and partnering ability. A charity that has a clear mission and vision that LBDP can share stories and images with their attendees greatly increases the success factors. Success meaning attendees as well as donations.

Although Little Black Dress party is an annual event Kelly is always on hunting for donations and partners. Her philosophy of “Give before you ask” has yielded immediate and long term relationships. She is always networking and has found opportunities at the local chamber of commerce leading to warm introductions. Kelly prefer to meet and buy someone a cup of coffee to share the LBDP story, THEN she asks for support. Support can mean a donation, attending the event or helping spread the message

LBDP has figured out when to say yes and when to say no. Yes is when both parties can help each other in reaching and exceeding goals. For instance they did say yes to adding a fashions how to last year’s event. It helped the fashion group promote their goods and expand name recognition. It helped LBDP have another reason for ladies to attend. Mutual promotion of the fashion show AND LBDP by both parties was mutually beneficial. They were both synchronized in getting the word out and ultimately reaching the end goal of helping the charity.

LBDP really puts the LIVE in Live Auction items. The formula for success continues with the live auction offerings.

This was our first year going BLUE. The marquee auction items at the for 2017 Little Black Dress Party are the bachelors. Yes, you heard that right the bachelors. Their men in uniform are Police Officers, SWAT Team Members, Army Sergeants and more. THey add a creative twist to the standard bid for bachelor date night. Their men in BLUE will be up for silent auction to bid on a guy for handyman work, self-defense training, or a 5K race buddy.

All year long LBDP is recruiting and taking applications for the men. They look for uniformed men that like to make a difference and give back to the community. Current, past or retired Fireman, Police Officer, Law Enforcement or Military are highly sought after and profitable. LBDP makes this easy with a simple form on their website. The silent auction is rounded out with additional goods and services at varying price points and starting bids along with a raise the paddle for the charity.

Facebook is an important part of the LBDP formula. The ability to connect with past donors and future supporters in-between annual events is precious. Photos of how the proceeds from the past event shows transparency for how the funds were dispersed.

Promoting the event for pre-registration was key to increasing reach for LBDP. Using social as that tool helped for early promotion and early registration and wider spread recognition.

Hyping up the upcoming auction via facebook video is fun yet strategic. Because of the Facebook algorithms videos tend to show more prominently on feeds. Videos for LBDP have many more views than a simple text only post. Posting a video on Facebook for the event was not haphazard. An outline was planned to be sure that all the pertinent information was gathered and later facilitated.To make their video interesting they included several personalities and visuals. The chairperson and auctioneer lent the energy to the video while a few of the most sought after auction items were exhibited. A couple practices, a few takes, and some minor editing then the video was ready to post.

This past year LBDP was able to secure their favorite auctioneer. Luckily he was local and able to help create the Facebook video this year. A quick glimpse into the live auction the activity and surely encouraged more ladies to attend.

So what is your fundraising formula?

Special thanks to Kelly Fennelly founder of Little Black Dress Party Inc. in Washington for taking the time to share their fundraising story.