COVID-19 is shutting down entire states and community activities. This has an obvious impact on any in-person auction fundraising event. Sadly the fundraising needs in times of crisis only rise causing more havoc.

With a nimble team, this means opening new doors to the fundraising efforts. Instead of walking into a gala or party, bidders are clicking and joining live streams. 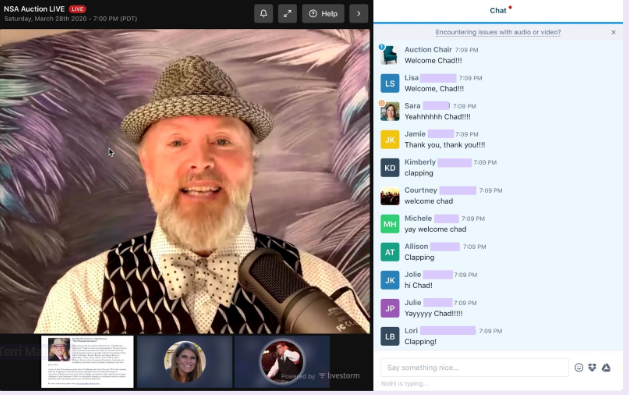 North Star Academy had the unlucky timing of having scheduled their Casino Royale Auction fundraiser at the exact same time that all community events were being canceled due to COVID-19 social distancing requirements being implemented. There were urgent and swift closures that required immediate action putting all the previous work at risk. The team quickly explored options to cancel, convert or postpone.

Spoiler alert: NorthStar Academy made as much as they did last year!

Terri M was kind enough to share her team’s experience with us. During a post-event follow up question and answer here is how they did it.

Making the Decision to Convert to Online Auction

Backstory:
On Tuesday morning, March 10th, we were looking at the due dates for the balance of the dinner and other payables, the large portion of which were due on Friday. We are in the San Francisco Bay Area, and things were going from "please cancel large events" to schools in San Francisco closing while schools south of us were closing, too.

We spent some time running numbers--what if we paid the balance for the dinner and it was canceled vs. an online live auction at 60% revenue. The dinner is quite expensive, and running the numbers, it became clear that even 60% revenue was better than paying the balance and risking the dinner being canceled. And we didn’t know if people would come anyways. In the end, it didn’t matter--within hours after the auction chair made the decision, the superintendent announced that all events and field trips were cancelled including the auction. By Friday, schools sent the kids home with all their stuff.

Question: Did you keep the same date of the event why or why not?

Answer: We kept the same date. Because of the shelter-in-place, we knew everyone was free that night, so why not? We also had a couple of weeks to prepare.

Question: How did you decide to continue with the auction fundraising event?

Answer: As we were deciding about how to do an online live auction--do we merge our live auction lots into the online silent auction in Auctria or do we do a live-streamed auction--our auctioneer invited us to watch an online live auction he was doing for a school in San Francisco (talk about a VERY tight schedule--they had less than a week to go online, but at least they were allowed to be together in the same room). We watched the webinar, and decided that while there were issues that needed to be worked out, it was definitely worth a try.

Question: Did you message your audience differently?

Question: How long was the online event, and would you do it longer, shorter, or was it just about right?

Question: How did bidding work?

Answer: The auctioneer would ask for a certain bid amount and people would type their bid into the chat area. Since there was minimal lag for chats, it worked quite well, even if the presentation was delayed. In order to catch anyone with an audio lag, he slowed down at the end of the bidding, and his wife who is his assistant tried to count down in the chat: 5-4-3-2-1-Sold!

We agreed that if a bid came in before "SOLD" was typed, then we were back to bidding regardless of what the auctioneer had voiced due to the possible audio lag that some viewers might have.

Question: In retrospect, what can you share with others so they too can find fundraising success?

Answer: We decided to retain our original speaker schedule and added the DJ back in at the last minute to provide music before the auction started so that people could check their sound. Whether a speaker should be live or recorded depends on the speaker’s internet connection. We were fortunate that our principal was able to record her fund-a-need presentation at the school. Our Parent Club president was also able to start off the night with live video, but if someone doesn’t have a reliable internet connection, they should record their speech as the video can be pre-loaded on the software’s servers or youtube. As we did our practice runs, it became clear that we needed a live audience to round out the presentation. Unlike our auctioneer’s first online live auction where the staff cheered in the background, we could not gather in the same place. Since the PC president was going to speak twice, we left her on audio-only throughout the presentation and had her family in conjunction with the DJ do laugh and applause as if they were the audience. It worked out very well, giving everyone the feeling that they were witnessing a live event.

We also offered raffle prizes throughout the evening to entice bidders to attend. Bidders had to respond in the chat to claim their prize.

Question: What live-streaming software did you choose and why?

Answer: We used Livestorm--in general, it had excellent connectivity for audio and video on laptops/computers and a known 10-15 second lag for phones which use "compatibility mode". The software specifically tells viewers when they're on "compatibility mode" so that they are aware of the lag, and it tells you, the host, who those people are in the list of attendees. Regardless of audio-delay, the chat messages come within a second or two on all devices so bids would arrive promptly.

Livestorm allows 6 speakers at a time (we only needed 4--the DJ, the Parent Club president, the principal, and the auctioneer) and the slide may take up one of those slots, plus it has an easy to use interface for making a presenter or slide take up the large part of the screen. Livestorm doesn't require a download which was one of our requirements when we started, although, now that every kid in the school has Zoom downloaded, I think we could've looked into that platform as well.

Overall, Livestorm worked well, but there are four caveats to using it: first, on certain browsers (notably Safari), people may connect and not be able to hear anything at all (they are working on this, and it might be fixed now). Second, about 2% of the audience was unable to hear the parent club president even though they could hear everyone else. As long as it was not the auctioneer, though, we were fine! Third, Livestorm is in France and support is available during France’s business hours, so there is currently no tech support for running a weekend auction (they say they are planning to eventually have 24-7 support, but I don’t know when that will go into effect). Fourth, some people never received their unique attendance link while others found it in the Spamtrap, so we specifically asked people to email us if they didn’t get their link. This issue seems to be common with live-streaming software as I’d experienced it with other vendors as well.

Question: What other livestream options would you suggest for consideration?

Answer: I would recommend looking into Clickmeeting, Onstream Webinars, and possibly Zoom in addition to Livestorm.

Clickmeeting, Onstream, and Livestorm have a very short delay for most modern browsers (1-3 seconds), but there are significant differences in what you can do in the presentation and to what extent you can control what the attendees see. We did not look into Zoom because we didn't want to make people download anything but in retrospect, all the kids now have it on their computer, so it's a moot point (I don’t know what the latency is as a webinar because I didn’t test it).

Everything else I tested either had latency issues (Webinarjam, WebinarNinja, On24), required a download (Gotowebinar, Webex, Zoho, Zoom), or had bugs that would prevent reliable bidding (Demio where there were issues with the chat reliability). I wasn't able to test Livestream (it would only let me create a webinar, but I couldn't view it on another device), and haven't tested Easy Webinar or Twenty-Three.

Whatever you choose, consider the following aspects:

Question: Will you be shipping all items to auction winners or providing a safe pick-up?

Answer: Since everyone is home, we are delivering items. To be 100% safe, you can package the items, set them aside for 5 days, and deliver with mask and gloves on using appropriate distancing.

Answer: I would do everything we did again but would also focus ahead of time on practicing the "backstage" connections between the speakers and auction team. I highly recommend doing multiple practice runs.

I would especially recommend the DJ and A "live audience" which you can have on audio only as it really adds to the presentation. You're essentially hosting a show, and the auctioneer is the main actor.

Fundraising During the COVID-19 is Okay

Ordinary business is not ordinary anymore. Fundraising and charities are in a unique situation in terms of continuing their charge. While some people may not be able to give due to job loss or job insecurity many can still give. When asking for donations or help with a fundraiser do be sensitive but also be pragmatic.

“I have been on many conference calls about that. The fact of the matter is a non-profit is a business and needs a revenue stream to provide their mission to their community. There are still supporters who believe in the work you do and are willing to support.”

Many charities, schools, 501(c)3’s are still needing funds to continue to serve their populations. Schools more than ever need help with technology, homelessness needs safe housing, hungry need access to untainted food, animals still need care, medical conditions don’t go away or research themselves because of COVID-19. If your cause is not fully funded, a modified event fundraiser is better than no fundraiser. In our experience people that can give, still give--they just need to be asked and have an easy avenue to do so.

Read more about fundraising in the shadow of Covid-19