Raffles to Heighten the Auction Success

Raffles can be prolific fundraising tools that can take the auction event to new heights. As a game of chance numbered tickets are sold, one or several tickets are randomly chosen and the holder of the winning ticket takes possession of the prize.

Know the Regulations
Friendly reminder, raffles are considered a game of chance and may be regulated. Consult the proper authorities knowledgeable in this area. The charity's bylaws should also be reviewed to remain in compliance.

In both the United States and Canada, all types of fundraising raffles are considered to be games of chance. Consequently, they are very tightly regulated and failure to adhere to state raffle laws is considered a serious offense.

For the United States- Here are a complete run-down and links to each state's raffle regulations.

Auctria maximizes and organizes the income potential of raffles!

Auctria allows a charity to set up FOR SALE items so donors can make purchases online or at the event in person with just their bidder number. Simply ‘sell’ the bidder the tickets in Auctria and give the the actual ticket to purchaser.
Auctria collects payment and sends out bidder receipts.

When selling tickets do so at single ticket rate. Encourage greater giving with ticket packages. For example $5=1 or ticket $20=5 tickets. Consider the audience's past spending habits to determine the starting price and increments for raffles. Raffles can be clever and profitable

How to determine which item to raffle v. offer at auction?

Raffles can be used to boost the income for a popular auction item that may ‘sell’ for only face value. For example: the local amusement park has donated 4 tickets for a value of $200. In the past auctions the sale maxed out at the $200 face value. Using a raffle scenario tickets can be sold at smaller increments but in an infinite quantity. At the end of the event the $200 amusement park tickets can net much more than $200 simply by offering it as a raffle. 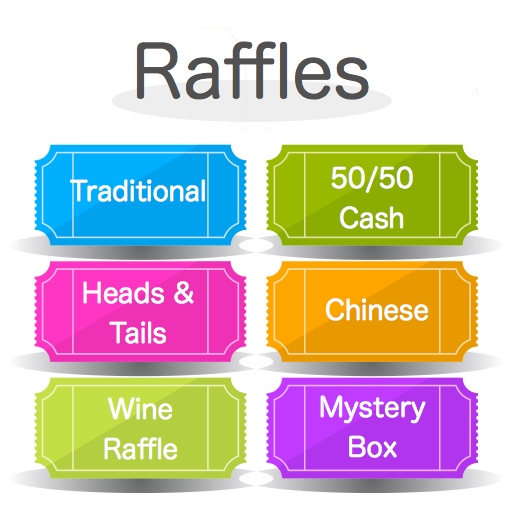 Sell tickets, at a given time choose one randomly, the winning ticketholder get the prize.

Sell tickets, at a given time choose one randomly, win 50% of the cash proceeds the remaining 50% benefits the charity.

This is an experience type raffle and an interactive way to engage the group. H-or-T raffle tickets tend to have a higher price point. ‘Mark’ the participants by giving out a small gift, wristband, necklace. Emcee announces the beginning of the H-or-T, participants stand with their hands on either their head or their ‘tail’. A coin is flipped and those that match the coin move on to the next round. This continues on until there is one winner standing, this person wins the prize.

Tickets are sold and chosen as usual. Multiple prizes, bundles, baskets are offered and a small bag or box displayed in front of each prize. The donor will ‘spend’ their ticket on the prize they most covet. This is a great way to raise total ticket sales.

Every wine ticket is a winner, some more of a winner than others. Purchase and set-up wine bottles, completely cover the bottles. Purchase wine bottles with a set margin lower than the Wine raffle ticket price. Do choose a few bottles with a higher value, thus the raffle and excitement component increases sales. Each ticket holder selects a covered wine bottle to enjoy. Each is winner but with a few special bottles to encourage participation the chance to win a greater prize energizes the raffle. Here’s a tip: Check with your local wine store regarding return policy. Most will allow unopened wine bottles to be brought back for a full refund thus the wine raffle can arranged with little risk.

A mystery phenomenon is always intriguing. Use donations to make a mystery box raffle. After the raffle winner is chosen the mystery can be revealed.