The Lift 4 Autism auction fundraising team is small but mighty! Authors Ginger Scott and Kennedy Ryan, along with LIFT manager Melissa Panio-Petersen, have perfected message amplification and that is key to their success. Lift 4 Autism Authors in Action is an annual online signed romance book auction. In April 2020, the founders thought it was going to be a down year in terms of fundraising due to COVID-19.

Believing that when you lead with the mission you can never go wrong, the auction team powered on through the nationwide and worldwide epidemic while many are under a shelter-in-place order. Under such unusual circumstances, they set their goals conservatively, deciding they would be happy hitting the $20K mark.

Lift 4 Autism was more than pleasantly surprised by bringing in more than $53,000!

April is National Autism Awareness Month. The LIFT 4 Autism campaign started as a grassroots effort to bring awareness and understanding to those with Autism.

“Designed to build a better awareness of the signs, symptoms, and realities of autism, #CelebrateDifferences focuses on providing information and resources for communities to be more aware of autism, promote acceptance, and be more inclusive in everyday life.”

The Lift 4 Autism team has been personally affected by Autism, as many have been. They wanted to get behind the cause to help spread the advocacy message. What started the first year as a very successful advocacy project was boosted the following year to a fundraiser. All proceeds raised went to Autism programs.

Donors Bring the Magic and Lend Voices for Success

Donors for the auction are the authors and they bring magic. The premise for donations is so simple and brilliant: Authors donate signed copies of their books! The genre of these authors is Romance Fiction and their supporters are avid readers and avid followers. The real fundraising magic happens when the participating authors use the power of their voice to carry the message to their very loyal readers.

Simple logistics make the auction donations easy. Authors submit descriptions for auction items along with an image. After the auction closes and the bidder has paid, the donating author signs and mails out the books to the winner. Ginger shares that the best part of using Auctria for their team is that they can set up the banking so that funds flow directly to Kulture City. They can reconcile and close the books within a week of the fundraiser closing.

“as a beautifully loud group with a very receptive audience.” 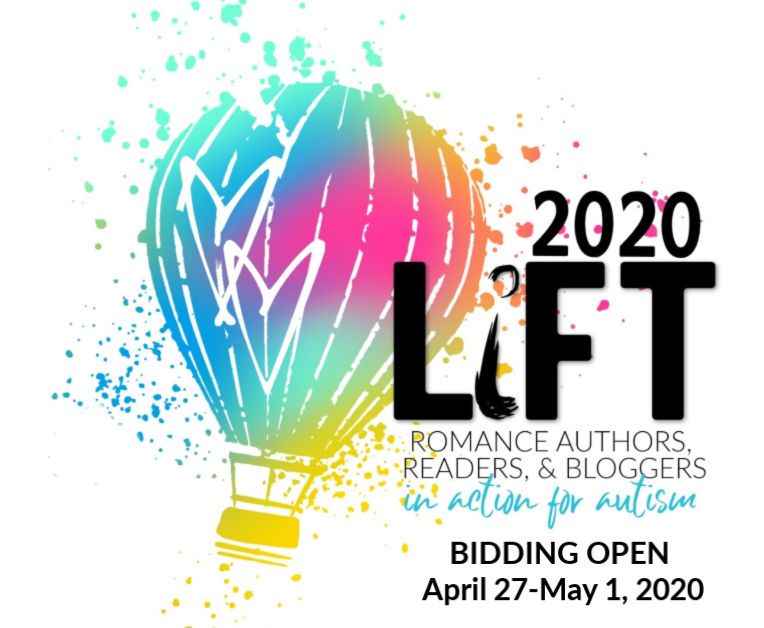 The authors/donors use their social media platforms collectively to boost the auction visibility and advocacy messages. The authors are extremely involved in sharing Lift 4 Autism messages and auction fundraiser details. Their fans are avid followers, and it’s rare to get to interact with an author so a signed copy of a book is a treasure to be had. Lift 4 Autism has a detailed marketing plan to guide the fundraising event.

Utilizing a common hashtag unites the Lift 4 Autism auction from many sources. Each year they simply change the date, so this year it was #lift2020 and #lift4autism2020. The following years will be a swap out of the numbers to the current year. Hashtags let users apply dynamic, user-generated tagging that helps other users easily find messages with a specific theme or content. So when all the authors tag with #lift2020 the social media surfer can quick-click the hashtag and see all the messages that were tagged the same even though it’s from different sources.

Leading up to the auction the preview for the auction is available as well as swag consisting of t-shirts and other apparel. Each year the images are refreshed encouraging annual purchases. This makes it easy for the authors to share a consistent message by providing images, sample messaging and links to the dedicated auction website. Each author that participates brings a massive social media audience to the table, and while many overlap, the constant roll of messaging reaches into the hundreds of thousands in impressions. 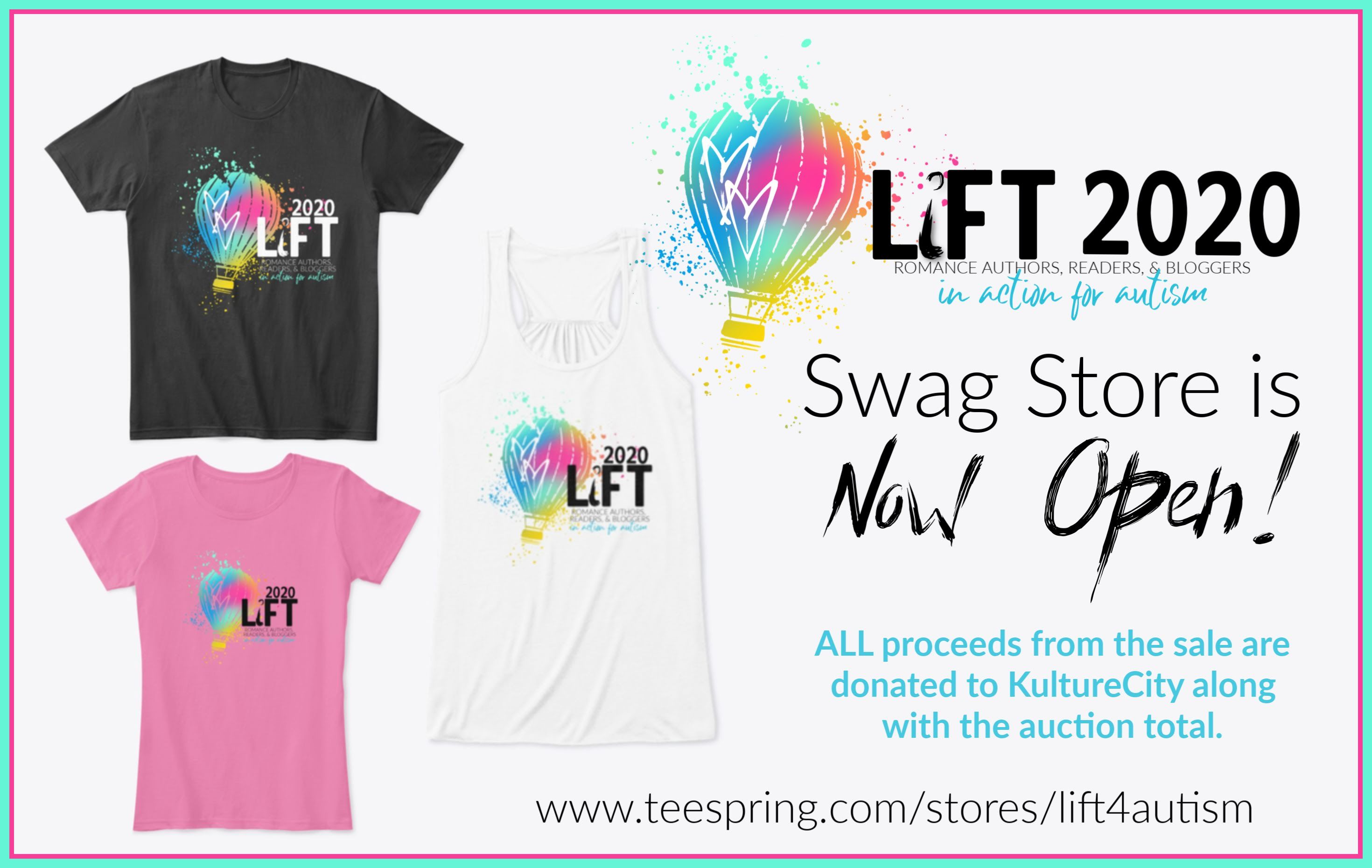 Auction opens and the bidding begins. The authors had previously signed up to share their auction item at a minimum on a preferred day. This ensures a steady stream of news and new potential bidders.

Autism touches so many. One in 40 people are diagnosed with autism, and this prevalence is felt by a large majority in society, and people want to help. Autism is a widely varied presentation and different for each person. Getting this awareness out shares the message that those living with Autism can grow and become integral members of society when given the right tools. Because Lift 4 Autism has chosen a distinct organization that helps make this happen, the donations are helping with immediate needs.

The final big post wraps up the event with data and statistics. By utilizing the Auctria platform, funds go directly to their charitable partner, Kulture City, without delay. With transparent reporting, so donors and bidders know that their dollars are helping a good cause quickly. This year’s funds are already being spent to help families on the Autism spectrum during the COVID-19 Pandemic. 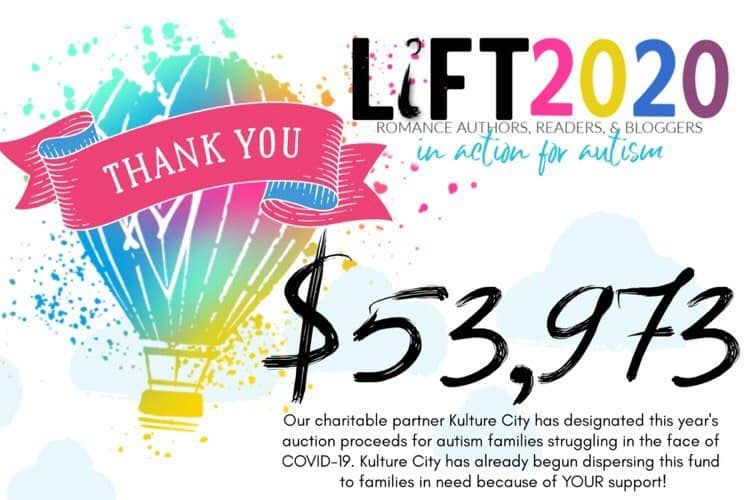 There are many valuable Autism programs to choose from to partner with. Lift 4 Autism knows their prospective donors are all over the US and wanted to make sure they were sure that the funds raised matched similar geography. So in looking for an Autism charity that was national in scope and provided a tangible good or service to Autistic individuals were the two big checkboxes. Kulture City is both national and provides tools to individuals to help with to lessen sensory overload.

Lift 4 Autism started the first year in an advocacy role sharing knowledge during Autism Awareness month in April. Seeing the engagement they decided to add a fundraising component the following year by leveraging the romance author community. Tapping into the community was natural because they already support each other on a wider scope.

Next was choosing which autism charity to support. Since the donors were national in scope they wanted to choose a charity that was also national in their support for people living Autism. Kulture City checked all the boxes and is the recipient of all Lift 4 Autism proceeds. The benefits go directly to Kulture City and in the past have been earmarked to support its lifeBOKS and tablet program. This year’s funds went to aid families during the COVID-19 Pandemic.

The History of Lift 4 Autism, Authors in Action for Autism

Background: Ginger and Kennedy are romance authors and attribute auction success to the entire romance author community. They really do lift each other up and come together for a great cause. Lift 4 Autism started as an advocacy campaign, and after realizing the power of their voices, the authors chose to add in a fundraising campaign.

Ginger shared that the auction team learns, and improves year after year.

Lift 4 Autism attributes their success to the romance literature community, the authors, the readers, the bloggers. Readers crossover from one author to the next devouring entire series of literature. Authors realize the audience flows back and forth so they do not view the other authors as the competition but as one large friendly crowd. They look forward to continuing to grow the event and help raise more awareness and more funds for Autism.

Lift 4 Autism Online Auction is an annual event taking place in April & May. LIFT is a charitable initiative rallying the romance reading community around Autism. All proceeds directly benefit Kulture City, including its lifeBOKS and tablet program.

A RITA® Award Winner and USA Today Bestseller, Kennedy Ryan writes for women from all walks of life, empowering them and placing them firmly at the center of each story and in charge of their own destinies. Her heroes respect, cherish and lose their minds for the women who capture their hearts.

Kennedy and her writings have been featured in Chicken Soup for the Soul, USA Today, Entertainment Weekly, Glamour and many others. She has always leveraged her journalism background to write for charity and non-profit organizations, but has a special passion for raising Autism awareness.The co-founder of LIFT 4 Autism, an annual charitable book auction, she has appeared on Headline News, Montel Williams, NPR and other media outlets as an advocate for ASD families. She is a wife to her lifetime lover and mother to an extraordinary son.

Ginger Scott is an Amazon-bestselling and Goodreads Choice and Rita Award-nominated author from Peoria, Arizona. She is the author of several young and new adult romances, including recent bestsellers The Hard Count, A Boy Like You, A Girl Like Me, Cry Baby, This Is Falling and Wild Reckless.

A sucker for a good romance, Ginger's other passion is sports, and she often blends the two in her stories. She has been writing and editing for newspapers, magazines and blogs for a hella long time. She has told the stories of Olympians, politicians, actors, scientists, cowboys, criminals and towns. For more on her and her work, visit her website here

When she's not writing, the odds are high that she's somewhere near a baseball diamond, either watching her son field pop flies like Bryce Harper or cheering on her favorite baseball team, the Arizona Diamondbacks. Ginger lives in Arizona and is married to her college sweetheart whom she met at ASU (fork 'em, Devils).